Well, I had great intentions of keeping up with the blog info but alas, I haven't. I should mention that my hubby and I have experienced a great loss. On October 30th, I went into pre-term labour and we lost our son. I did the following layout to pay tribute to his little life. 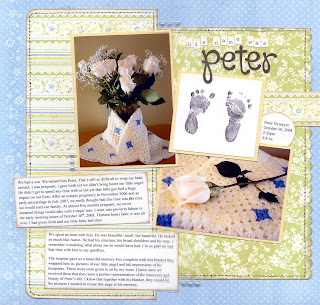 Journaling: We had a son. We named him Peter. That’s still so difficult to wrap my head around. I was pregnant, I gave birth yet we didn’t bring home our little angel. He didn’t get to spend any time with us but yet that little guy had a huge impact on our lives. After an ectopic pregnancy in November 2006 and an early miscarriage in July 2007, we really thought that this time was the time we would start our family. At almost five months pregnant, we never dreamed things would take such a tragic turn. I went into pre-term labour in the early morning hours of October 30th, 2008. Thirteen hours later, it was all over. I had given birth and our little baby had died.

We spent an hour with him. He was beautiful; small, but beautiful. He looked so much like Aaron. He had his structure, his broad shoulders and his nose. I remember wondering what about me he would have had. I’m so glad we had that time with him to say goodbye.

The hospital gave us a beautiful memory box complete with this blanket they wrapped him in, pictures of our little angel and ink impressions of his footprints. These roses were given to us by my mom. I knew once we received them that they were a perfect representation of the innocence and beauty of Peter’s life. I knew that together with his blanket, they would be the pictures I needed to create this page in his memory.
Posted by Cherie at 5:32 PM

Cherie, I am so sorry for your loss. Your tribute to Peter is a beautiful reminder of the short, but sweet time you had with him.

so sorry to hear about your loss... your layout about Peter is beautiful.

Wow Cherie, you are so strong, this layout is beautiful! 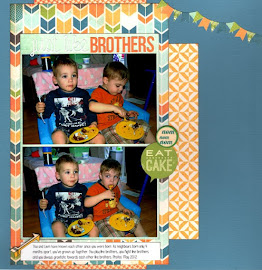